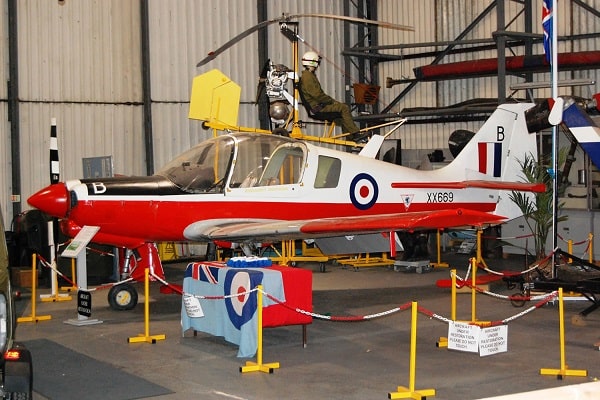 The South Yorkshire Aircraft Museum moved to the Aeroventure site in the 1999 from its long-term home in Firbeck when the last remaining buildings from the former RAF Doncaster were vacated by Yorkshire Water.

The site opened as a civil airport in the 1930's with the museum's buildings constructed in 1938 by the RAF with the Second World War imminent. While the airfield continued to be used by the RAF and later civilian operators following the war the Aeroventure site was fenced off from the airport site to be used as a water board depot.

While the rest of the airfield site was re-developed into what is now the Lakeside development the water board continued to use their depot until the late 1990's. When Yorkshire Water left the site, it was too good, an opportunity to miss and the South Yorkshire Aircraft Museum moved in.

The site had been badly vandalised in the intervening time and renovating the site presented a major task which is still ongoing in some areas of the site more than 10 years on, however after much hard work the museum opened to the public under the new banner of 'Aeroventure' in 1999.

The museum is open Tuesday to Sunday 10am- 5pm during British Summer Time and 10am-4pm through the winter. During school holidays the museum is open 7 days a week and is also open on bank holidays. Details of holiday opening times such as Christmas are usually posted in the news section of the site.

~Things to do and see in Doncaster, Explore Doncaster~